Jergel’s Rhythm Grille might as well be located on its own planet. It is 28 degrees and getting hotter, but according to the locals it was snowing two days previously which might explain why the car park surrounding the place is lined with trees bursting with luxurious yellow blossom that gets visibly more abundant as the day wears on and the temperature goes up. Jergel’s is big, plush club with private rooms and a cigar and whiskey bar behind the stage. We are aware that this is the one show on the tour that hasn’t sold well, at least in relation to its capacity. As a courtesy I want to make sure that the manager A. J. knows that we know this and A. J. explains that they have problems selling concert tickets generally because touring bands are requesting that ticket holders are vaccinated against Covid and hardly anyone in western Pennsylvania is. This takes a second to rationalise—we are in heartland, rust belt United States and liberal expectations need to be reigned in here. I can’t formulate a coherent reply and nod vaguely.

Sound check is early to allow the place to open at 5 and by 4.30 we are all at a loose end. I get talking to A. J. again who, to my surprise, tells me he walks to work. “It takes me five minutes to walk here and two hours to walk home”. Jergel’s is, coincidentally, just off highway 19 (albeit 300 miles north of the picnic table we were sat at last night out front of the Summersville Hampton Suites) and remembering that it was pretty much impossible to get across the road there, I wonder if this has something to do with it. “Nah, I always stop at the bar. Just over there,” he says pointing to a building fifty feet away obscured by the blossoming trees. “The Brush Creek Inn. Been there since 1886. If you go over there tell Sue I sent you.” It doesn’t seem like much around these parts would predate 1986 so this piques my interest. As I’m heading over there I bump into Justin and we make our way past the pickups and the Harley’s lined up in front and head inside. The pool room clientele looks like it could be a little challenging but the bar is quiet so we choose a table and I order a beer. (Justin is on water and really so should I be given the recent stomach upset, but I can’t see us getting away with ordering two waters). There is a sign next to the cigarette machine (yes, it you can still smoke in bars in Warrendale) that says the jukebox is OFF during Pittsburgh sporting games. And sure enough the five people in the bar are all watching the Pittsburgh Pirates vs the Chicago Cubs live from Wrigley Field on a tv behind the bar. While I’m ordering I notice that the score is 17-0 to Chicago. By the time I’ve finished my Heineken the final score is 21-0 which is unheard of in Major League baseball. 4-0 is a sound defeat. 10-0 is an embarrassing drubbing. 21-0 must be some kind of record. We leave without engaging the locals.

In the end a respectable 150 turn up to watch us play. Not enough to make Jergel’s look busy exactly, but enough people to make the show seem worthwhile, and as always with US audiences they make us feel much appreciated. It is an early show and we are loaded out by 12.30. With a short drive to Cleveland, the bus isn’t due to leave till 4 am. By 1.30 the temptation presented by the Brush Creek Inn proves too great on the penultimate night of the tour and Buddy, Jim and I throw caution to the wind and decide make our way over for a nightcap. Everyone is super hospitable. Sure enough, A. J. is there but having spent the entire day at the bar in Jergel’s and now installed in the Brush Creek he is now pretty much incoherent. He is surprisingly steady on his feet but I can see how it might take him two hours to get home. Last orders at 2 and back to the bus on the back of one of the massive bikes that are still parked outside (courtesy of Ryan, via a somewhat circuitous loop on Northgate Drive that must have woken everyone within half a mile). Just what touring should be like.

Cleveland, early on a Sunday morning. I feel fully recovered and in denial that this is the end of the road. The final venue is another damn supper club, The Music Box. There is a decent looking Sunday brunch on offer there but distressingly this will be accompanied either by

The famous skyline has been anonymized by the towers of glass that rise above Hudson Yards leaving only a glimpse of the needle on top of the Empire State building visible as we drive in from the west but the heart still beats faster as the city approaches. We have 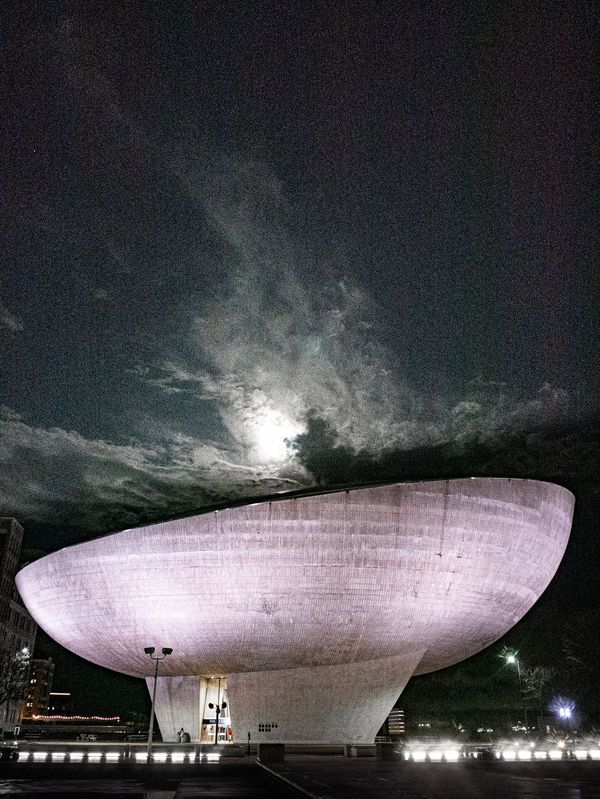 After a long overnight drive from Boston the bus reverses directly off of a highway into a loading bay under the Empire State Plaza in Albany NY. There is breakfast at the venue so after Gary has docked the bus and connected the shore power Kris and I venture out